Blog: Tourism water use during the COVID-19 shutdown: A natural experiment in Hawai‘i

BLOG POSTS ARE PRELIMINARY MATERIALS CIRCULATED TO STIMULATE DISCUSSION AND CRITICAL COMMENT. THE VIEWS EXPRESSED ARE THOSE OF THE INDIVIDUAL AUTHORS. WHILE BLOG POSTS BENEFIT FROM ACTIVE UHERO DISCUSSION, THEY HAVE NOT UNDERGONE FORMAL ACADEMIC PEER REVIEW.

A recent study published in the Annals of Tourism Research used the shutdown of tourism in Hawai‘i during the COVID-19 pandemic to shed light on the relationship between tourism and water use on O‘ahu. The importance of water management is accentuated when there is near complete reliance on groundwater as in Hawai‘i, where 99% of drinking and half of all water use is sourced from aquifers. There is growing evidence that available freshwater resources on the island of O‘ahu have been diminishing over time. The number of tourists visiting the island grew by 50% between 2009 and 2019, with the number of tourists reaching about 12% of the resident population, so it is important to understand the impact of the tourism industry on the precariously-balanced water supply. This is especially true given the potential climate change effects on water availability and further expansion of the tourism industry.

On O‘ahu, residential water consumption accounts for about 55% while hotels and resorts account for about 5% of total municipal water use, but in per-capita terms tourists use approximately the same amount of water as residents. This study examined how the amount and distribution of water consumption on the island shifted during the pandemic. This was accomplished using water metering data from the local water utility (Honolulu Board of Water Supply), measured tourism levels, hotel and Airbnb occupancy, and foot traffic recorded in locations frequented by tourists. 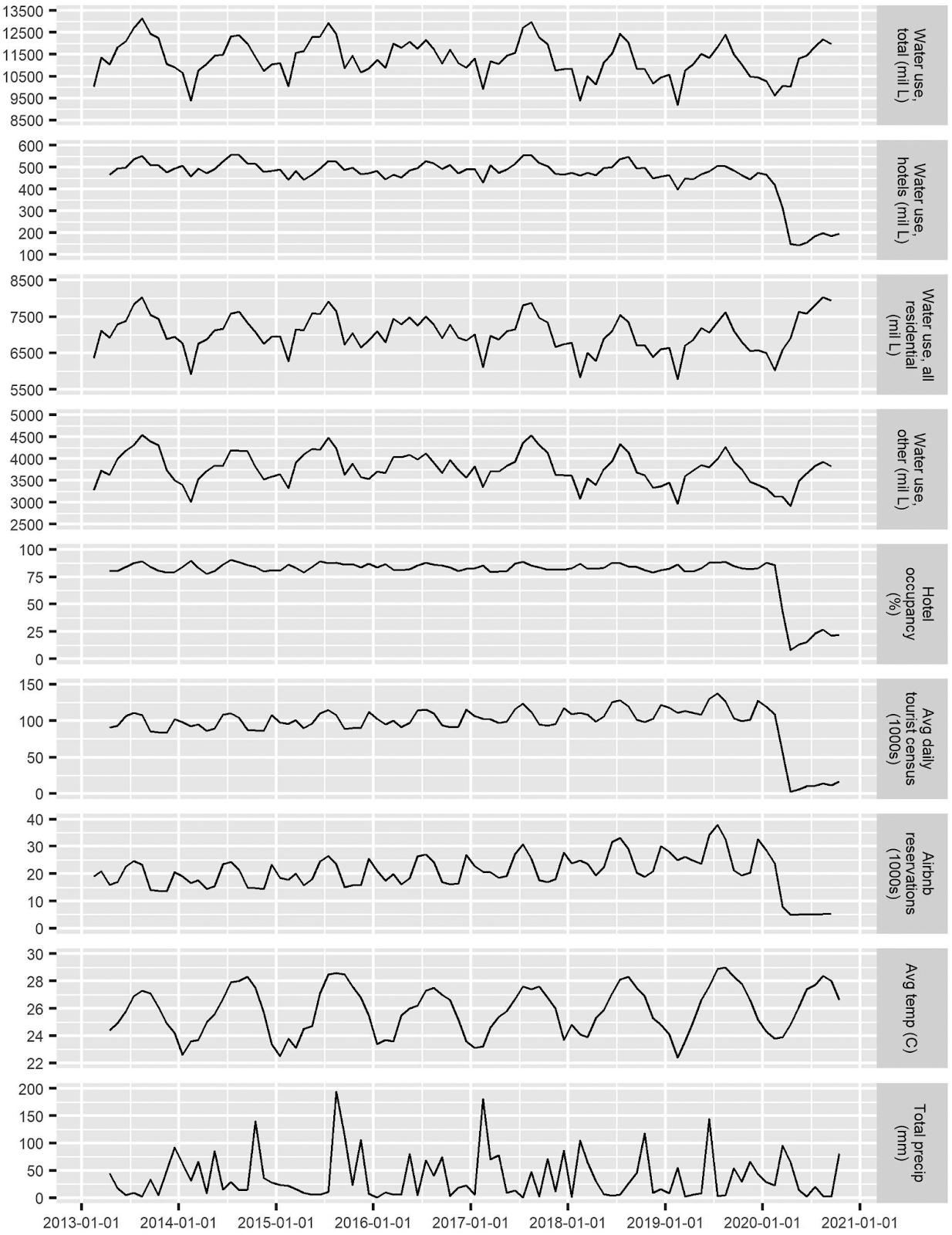 Interestingly, no significant relationship was found between residential water use and Airbnb reservations, despite the similarly large drop in Airbnb reservations seen during the pandemic. Several factors may have contributed to this:

Care should be taken when interpreting the results beyond the scope of this analysis. The significant disruptions caused by the pandemic followed in the wake of extremely high capacity utilization in the tourism industry. The negative shock created (temporary) “slack” in the system, and we likely only observed a partial adjustment in water consumption. Further work will be required to determine whether these results carry over for more marginal changes, like a gradual change in tourism over time. Also, had the tourism industry experienced a positive shock, it would have been pushing against existing capacity constraints, a situation opposite what occurred during the pandemic. Applying the relationships found here to an increase in tourism may not be appropriate since increases and decreases in tourism may affect water consumption asymmetrically.